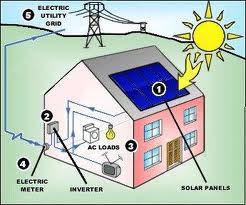 Starting this month,  San Diego Gas & Electric is changing the rules on how it charges for its power, moving the “peak demand” window when power costs the most from midday to mid-evening. Under the new controversial “solar-killing” rate structure, residential solar customers will pay 27 cents per kilowatt hour for power from 9 p.m. until 4 p.m. the following day, with prices doubled for the 4pm-to-9pm window.  This will significantly impact SDG&E customers who have installed solar panels, as  those customers who are able to generate excess power during the late afternoon and evening stand to be compensated more by the utility than for power generated during the day, when the sun is most likely to be shining.  By shifting peak hours into the evening, solar customers will end up paying more for the electricity they take from the grid and less for the excess power they feed back into it.

Under former solar rules, it was simple for solar companies to design a solar power system that resulted in a $0 bill for electric energy.  A solar company looked at how much energy a household used on an annual basis and designed a solar power system to produce that same amount of energy per year, regardless of when the system produced energy or when the home consumed energy.  Since June 2016, solar customers were subjected to a new requirement, which slowly forces all self-generating SDG&E customers on to “time-of-use rates.”  So now, buying and maintaining a PV array on your roof requires a new economic analysis because the controversial time-of-use rates charge based upon when a home uses energy in a day, not just how much the home uses in a given month.

Fortunately,  existing solar customers who received permission to operate (PTO) before July 31, 2017 are allowed to keep their existing TOU periods for five years after their PTO date. After five years, they will be transitioned to the prevailing TOU schedule. However, the utility may change the relative value of energy in each TOU period, as they have done in this case.  For customers who installed more than five years ago, they will be forcibly subjected to these solar-unfriendly time-of-use rates.

The rub is that solar doesn’t work at night when the utilities want to charge more.  So solar customers most economic option is now to spend more money on a back-up battery array that allows homeowners to store their solar power and use it when electricity is most expensive.  Unfortunately, it’s not as easy as just buying the batteries;  many solar systems are not equipped for a battery and will not be able to weather these rate changes.  Installing a battery system is not only expensive but may compel a redesign of a home’s electrical system.

According to Solar World, a typical family who went with solar panel combined with a battery backup saves up to $80,000 over 20 years. If their next door neighbors go solar without a battery at the same time, the neighbors are estimated to incur an additional $550 per year. Over 20 years  (based upon a 6% escalation)  the family without a battery will have paid $20,000 in additional costs that they were not necessarily expecting.

The costs may be mitigated somewhat by state assistance.  For SDG&E customers currently considering an investment in solar,  they should check out the state-sponsored Self-Generation Incentive Program, which can cover roughly half the cost of a battery. In addition, the remaining cost can be offset by a 30 percent federal tax credit……assuming Congress doesn’t repeal this credit. A typical battery costs $6,500, including installation so after the rebate and tax credit, the cost is as little as $2,000, and the battery will pay for itself through energy savings in six to eight years.

Millennials in the Work Force

Microbiome Testing: Not What You Think It Is
Scroll to top